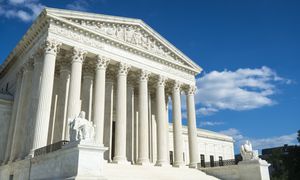 According to the Court, ensuring that providers take steps to avoid transmitting a “dangerous virus to their patients is consistent with the fundamental principle of the medical profession: first, do no harm.”

The U.S. Supreme Court, ruling 5-4, has stayed the injunctions that barred enforcement of the ...

According to the Court, ensuring that providers take steps to avoid transmitting a “dangerous virus to their patients is consistent with the fundamental principle of the medical profession: first, do no harm.”

The U.S. Supreme Court, ruling 5-4, has stayed the injunctions that barred enforcement of the CMS COVID-19 vaccine mandate in 24 states. The Court emphasized that one of HHS’ functions is to ensure that health care providers protect their Medicare and Medicaid patients’ health and safety and found that these “unprecedented circumstances provide no grounds for limiting the exercise of authorities the agency has long been recognized to have.” Justices Thomas, Alito, Gorsuch, and Barrett dissented.

Vaccine mandate. On November 5, 2021, CMS issued an interim final rule requiring most Medicare- and Medicaid-participating providers and suppliers to ensure staff, except for those with medical or religious exemptions, are fully vaccinated against COVID-19 (see Rule requires COVID-19 vaccination for staff of most Medicare providers, suppliers, November 4, 2021). Two coalitions of states, represented by Missouri and Louisiana, challenged the mandate. The district courts in both cases issued temporary injunctions barring enforcement of the mandate, and the 5th and 8th Circuits denied motions to stay the injunctions as to those 24 states. However, a Florida district court refused to bar enforcement of the mandate, and the 11th Circuit denied Florida’s motion for injunction pending appeal. In December the Biden Administration requested that the U.S. Supreme Court stay the injunctions pending appeal, and the Court heard oral arguments on January 7 (see Fate of CMS’ vaccine mandate in half of U.S. states now lies in the Supreme Court’s hands, January 10, 2022).

Authority to issue the rule. The Court concluded that the HHS Secretary had the authority to issue the mandate. It relied on statutes such as Soc. Sec. Act §1861(e)(9) (42 U.S.C. §1395x(e)(9)), which requires hospitals, as a condition of receiving Medicare and Medicaid funds, to meet “such other requirements as the Secretary finds necessary in the interest of health and safety” of patients. The Court found that the mandate “fits neatly” within the language of the statute and is consistent with other Medicare conditions of participation, including the implementation of an infection prevention and control program. “COVID-19 is a highly contagious, dangerous, and—especially for Medicare and Medicaid patients—deadly disease,” and the Secretary concluded that a vaccine mandate is “necessary to promote and protect patient health and safety” in the face of the ongoing pandemic. The Court acknowledged that while the vaccine mandate goes further than what the HHS Secretary has done in the past to implement infection control, “he has never had to address an infection problem of this scale and scope before.”

Not arbitrary and capricious. Contrary to the states’ argument, the rule is not arbitrary and capricious, according to the Court; there was no evidence that the Secretary failed to “examine the relevant data and articulate a satisfactory explanation for” his decisions to impose a vaccine mandate instead of a testing mandate, require vaccination of employees with “natural immunity” from prior COVID-19 illness, and depart from HHS’ prior approach of merely encouraging vaccination. Further, the Secretary didn’t “entirely fail[] to consider” that the rule might cause staffing shortages, including in rural areas.

Other statutory objections. The Court found that the Secretary had good cause to delay notice and comment in light of the impending winter flu season. In addition, the Court concluded: (1) the Secretary was not required to “consult with appropriate State agencies” pursuant to Soc. Sec. Act §1863 (42 U.S.C. §1395z) before issuing the rule, and consultation during the deferred notice-and-comment period is permissible; (2) the Secretary was not required to prepare a regulatory impact analysis pursuant to Soc. Sec. Act §1102 (42 U.S.C. §1302) discussing the rule’s effect on small rural hospitals because he did not proceed on the basis of a notice of proposed rulemaking followed by a final version of the rule; and (3) the rule does not violate Soc. Sec. Act §1801 (42 U.S.C. §1395), which prohibits the federal government from exercising supervision or control over the tenure of health care workers: “That reading of section 1395 would mean that nearly every condition of participation the Secretary has long insisted upon is unlawful.”

Dissenting opinions. Justice Thomas’s dissenting opinion disputed that HHS had the statutory authority to issue the rule. Specifically, Soc. Sec. Act §§1102(a) (42 U.S.C. §1302(a)) and 1871(a)(1) (42 U.S.C. §1395hh), which the government relied on more extensively in its brief versus oral argument, are administrative and have, at most, a tangential relationship to Medicare and Medicaid. Further, five of the “scattered provisions” relating to specific providers do not authorize CMS to impose “health and safety” regulations. He concluded, “These cases are not about the efficacy or importance of COVID-19 vaccines. They are only about whether CMS has the statutory authority to force healthcare workers, by coercing their employers, to undergo a medical procedure they do not want and cannot undo.”

Justice Alito also wrote a separate dissent noting an “extraordinary departure from ordinary principles of administrative procedure” and warning that the decision could “have a lasting effect on Executive Branch behavior.”