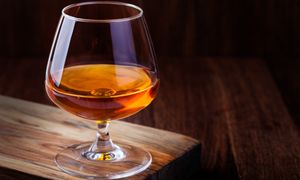 But rapper 50 Cent earned half a victory, at least for now, with dismissal of trademark claims.

The maker of a cognac with an iconic jewelry-shaped bottle design can move forward on its patent infringement claim against a company owned by chart-topping rapper 50 Cent, the federal court in Manhattan has held. But the court, while greenl ...

But rapper 50 Cent earned half a victory, at least for now, with dismissal of trademark claims.

The maker of a cognac with an iconic jewelry-shaped bottle design can move forward on its patent infringement claim against a company owned by chart-topping rapper 50 Cent, the federal court in Manhattan has held. But the court, while greenlighting the design patent claim brought by cognac maker Rémy Martin, found that the venerable French company would have to revise and refile its trademark claims in order for them to proceed (E. Remy Martin & Co. v. Sire Spirits LLC, January 10, 2022, Hellerstein, A.).

E. Remy Martin & Co. brought this suit for infringement against Sire Spirits, a company founded by Curtis Jackson—otherwise known as rapper 50 Cent—that makes and markets the Branson brand of cognac. The lawsuit alleges that 50 Cent purloined the distinctive look of the XO bottle, a wheel or donut-shaped glass structure consisting of a jewelry-like outer ring surrounding an oblong-shaped middle. The complaint, which also names Branson’s Italian-based bottle maker, alleges that the competing bottle infringes its design patent, U.S. Design Patent No. 638,649, as well as four trademark registrations.

The 50 Cent-owned company moved to dismiss the complaint for failure to state a claim, leading to this opinion.

Design patent infringement. The court found that Remy Martin adequately stated a claim for patent infringement. 50 Cent’s company argued that the claim failed because it did not allege that the competing bottle includes the limitations of all seven figures of the patent. But this was not the correct legal standard, the court held. Instead, courts analyzing claims for design patent infringement need only apply the “ordinary observer” test rather than the so-called “points of novelty” test advanced by the upstart competitor. Under that standard, the court held, the complaint was sufficient. The complaint described the accused bottle as having “substantially the same clear bottle” with “an overall circular, toroidal (wheel-like) shape, with most of its surface area containing raised flat and angled quadrilateral and triangular facets.” In addition, the complaint stated that the resemblance is so substantially similar that it would deceive the ordinary observer, inducing him or her “to purchase one supposing it to be the other.” As the court observed, “Rule 8 requires no more.”

Under that standard, the court found, Remy Martin’s complaint failed. Rather than providing a list of clearly and separately identified elements, the court noted, the complaint relied on a series of images, the registered marks, “and a general description of the overall look—a toroidal, faceted, and central-recessed design.” This, the court observed, was not enough because absent sufficient particularity, a competitor would not know “what new designs would be subject to challenge.” Thus, the trademark infringement claims would have to be dismissed, albeit with leave to amend to add further specificity.

Personal jurisdiction. The court also found that it had personal jurisdiction over the Italian maker of the bottle in question. The complaint alleges that the Italian company committed the alleged infringement through its New York-based subsidiary, which was also named in the lawsuit. Moreover, a wide range of public statements as well as private email correspondence unearthed by Remy Martin suggested that the Italian company treated the New York subsidiary as its New York “office,” that was directly involved in the design and manufacture of the bottles for the New York customer, and that it shipped samples directly to New York. Thus, personal jurisdiction was amply established.