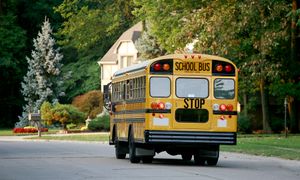 A school bus manufacturer could not comply with the federal rules governing rear emergency exits of school buses and a state law duty to include an electronic locking mechanism that would prevent a person from opening the exit when the bus is traveling at highway speeds.

Dismissal on preemption grounds by a federal district court in T ...

A school bus manufacturer could not comply with the federal rules governing rear emergency exits of school buses and a state law duty to include an electronic locking mechanism that would prevent a person from opening the exit when the bus is traveling at highway speeds.

Dismissal on preemption grounds by a federal district court in Texas was upheld by the U.S. Court of Appeals for the Fifth Circuit in a products liability action brought by the parents of a 13-year-old boy who died after he opened the rear emergency door of a school bus and fell from the bus while it was traveling at a high speed on a highway. The parents had alleged that the bus manufacturer failed to comply with a common law duty under Texas law to include a safety device on the emergency exit in the form of an electronic locking mechanism that would prevent a person from opening the exit when the bus was moving at highway speed. The appellate court agreed with the district court’s reading of Federal Motor Vehicle Safety Standard (FMVSS) No. 217, Bus Emergency Exits and Window Retention and Release, which requires a school bus manufacturer to outfit school buses with rear emergency exits that can be opened in only one way-by a single person operating a failsafe manual release mechanism. According to the Fifth Circuit, it would be impossible for the manufacturer to comply with FMVSS 217 and comply with the state common law duty to include an automatic speed lock. Therefore, the federal regulation preempted the state law, and the appellate court affirmed the district court’s decision to dismiss the complaint (Estate of Gabriel Miranda, Jr. v. Navistar, Inc., January 12, 2022, Davis, W.).

Background. While traveling in a school bus on the interstate during an eighth grade class field trip, one of the class members opened the school bus’s rear emergency exit and fell to the pavement below. The 13-year-old boy suffered severe trauma to his head and was pronounced dead later that morning. The school bus, a 2010 CE-Series, was designed, manufactured, and distributed by Navistar, Inc. The rear emergency exit of the school bus was equipped with a release mechanism that allows a person to manually latch and unlatch the door. To open the emergency exit, a person must unlatch the door by pulling the red lever upward and then push against the door. In addition, the rear emergency exit had a separate “vandal lock” to prevent unauthorized access while the bus is not in use. It is a simple barrel bolt latch consisting of a steel bolt inside a sheath that is connected to the door frame. The bolt slides into a steel ring that is connected to the door itself in order to engage the lock. When the lock is engaged, the engine starting system will not operate. Also, if the lock is engaged while the bus’s ignition switch is in the “ON” position, an audible alarm sounds at the rear exit and near the driver.

The parents of the decedent filed suit against the manufacturer alleging strict liability claims under Texas law and contending that the company was not in compliance with the state law duty to equip the rear emergency exit with an adequate locking system. In particular, the family relied on the testimony of their expert witness, an automotive electronics engineer, who outlined three possible designs for an automatic in-motion locking system that would engage at a set speed. With such a lock on the manufacturer’s school buses, a person would have been prevented from opening the rear exit while the bus was travelling at highway speed. Navistar moved for summary judgment, contending that federal law preempted the parents’ state law claims. The district court granted the motion and denied the parents’ motion for reconsideration. The parents appealed.

The law. The National Traffic and Motor Vehicle Safety Act (49 U.S.C. §303103(b)(1)) provides that a state may prescribe or continue a standard applicable to the same aspect of a motor vehicle or motor vehicle equipment only if the standard is identical to the standard prescribed in the Act. However, states are not precluded through common law from imposing duties on manufacturers beyond the federal law requirements. The court explained that if a state’s common law duty differs from federal regulatory requirements, it is preempted if it would be impossible for a private party to comply with both state and federal law or if the state law poses an obstacle to the accomplishments of the objectives and purposes of the federal rule.

Appellate court’s analysis. The Fifth Circuit concluded that the parents’ claims were preempted because it would be impossible to include an automatic speed-activated lock, as the parents maintained was required under state law, and to comply with FMVSS 217. With the parents asserting that the manufacturer had a common law duty under Texas law to include such an automatic locking mechanism, the appellate court stated that the question before it was whether NHTSA’s regulation of school bus emergency exits under FMVSS 217 preempted that state law duty.

According to the court, the primary bar to the parents’ claims under FMVSS 217 is S5.3.3.1, which provides that each school bus emergency exit door must allow “manual release” of the door by a single person and the release mechanism must “operate without the use of remote controls or tools, and notwithstanding any failure of the vehicle’s power system.” The court stated that because the locks proposed by the parents’ expert ware automatic, they were in direct conflict with FMVSS 217’s manual release requirement. In addition, because the proposed devices relied on a separate speed signal, they conflicted with the regulation’s prohibition of “remote controls.” Further, S5.4.2.1(a) of the safety standard provides that upon release, the emergency exit door must be capable of being manually opened by a single person. According to the court, reading S5.3.3.1 and S5.4.2.1(a) together, FMVSS 217 requires that one person must be able to manually open the emergency exit, without the assistance of remote automated devices, by using the release mechanism. In the appellate court’s view, the requirement of a simple, manual release mechanism is consistent with concerns related to the evacuation of occupants in an emergency because it allows a student to operate an emergency exit and escape from the school bus with speed and ease while an automatic speed lock would carry a risk of mechanical failure, increasing the risk that students would be trapped in school buses in emergencies.

The court rejected the parents’ contention that the prefatory clause in S5.3.3.1-"[w]hen tested under the conditions of S6”-means that the manual release requirement only has to be met when the bus is stationary during compliance testing. The court pointed out that the term “stationary” is not listed among the S6 conditions. Moreover, the court noted that if it adopted the parents’ position, a manufacturer could modify the exits in a way that made them inoperable when a school bus is loaded with children as long as the exits worked properly under the controlled environment of a compliance test. The court would not construe the regulation “to allow for such absurd results.”