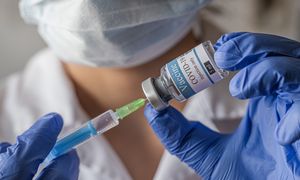 Will the current COVID-19 surge and hospital staffing shortages factor into the Court’s decision on whether to stay the preliminary injunctions in 24 states?

In a hearing on the Biden Administration’s motions to stay the injunctions barring enforcement of the CMS COVID-19 vaccine mandate in 24 states, m ...

Will the current COVID-19 surge and hospital staffing shortages factor into the Court’s decision on whether to stay the preliminary injunctions in 24 states?

In a hearing on the Biden Administration’s motions to stay the injunctions barring enforcement of the CMS COVID-19 vaccine mandate in 24 states, much of the discussion focused on HHS’ authority to protect the health and safety of Medicare and Medicaid patients and the unprecedented nature of the pandemic. Justice Kagan said that “all the Secretary is doing here is to say to providers, … basically the one thing you can't do is to kill your patients. So you have to get vaccinated so that you're not transmitting the disease that can kill elderly Medicare patients, that can kill sick Medicaid patients.” While it normally takes months for a Supreme Court decision to be issued, it is likely that the Court will make a decision in this case quickly.

Challenges to vaccine mandate. CMS issued an emergency interim final rule on November 5 that originally required most providers and suppliers participating in the Medicare and Medicaid programs to ensure staff, except for those with medical or religious exemptions, were fully vaccinated against COVID-19 by January 4 (see Rule requires COVID-19 vaccination for staff of most Medicare providers, suppliers, November 4, 2021). Two coalitions of states, represented by Missouri and Louisiana, filed lawsuits challenging the mandate. The Missouri court blocked enforcement of the vaccine mandate in 10 states, and the next day the Louisiana court issued a nationwide injunction, excluding the 10 states subject to the Missouri order. On December 15, another federal court blocked enforcement of the rule in Texas.

In a one-sentence order, a divided panel of the 8th Circuit denied CMS’ motion for a stay pending appeal in the Missouri case. The 5th Circuit stayed the national preliminary injunction in the Louisiana case but upheld the injunction for the 14 plaintiff states. However, the 11th Circuit—also a divided panel—denied Florida’s motion for injunction pending appeal after a district court refused to bar enforcement of the mandate. Meanwhile, on December 28 CMS announced that it would begin enforcing the mandate in the 25 states not covered by injunctions, D.C., and the territories; the first dose is now required January 27, and staff must receive all required doses by February 28 (see CMS offers guidance for omnibus staff vaccinations at Medicare and Medicaid facilities, January 4, 2022).

Before the Supreme Court the Biden Administration requested stays pending appellate court consideration of the injunctions and, if necessary, pending a petition for a writ of certiorari. The government argued that mandate “will save hundreds or even thousands of lives each month,” and staying the injunctions would “allow the Secretary’s urgently needed health and safety measure to take effect before the winter spike in COVID-19 cases worsens further.”

In deciding whether to issue a stay, the Court considers whether: (1) four justices are likely to vote to grant certiorari if the court of appeals ultimately rules against the applicant; (2) five justices would likely conclude that the case was erroneously decided below; and (3) on balancing the equities, the injury asserted by the applicant outweighs the harm to the other parties or the public. all of those factors powerfully support a stay.”

Statutory authority. In its brief, the government argued that it is likely to succeed on the merits because the vaccine requirement falls within the Secretary’s statutory authority, including Soc. Sec. Act §1102(a) (42 U.S.C. §1302(a)), section 1871(a)(1) (42 U.S.C. §1395hh), and a variety of provider-specific provisions. During oral argument the government relied more heavily on the provider-specific provisions, a shift that Justice Barrett called “wise” because 11 or more of the 15 specifically reference health and safety. She asked if “I disagree with you that every single statute grants this authority, why shouldn't then we just leave the Fifth Circuit's injunction in place?” The government responded that such statutes still give the Secretary the authority to set conditions of participation.

Justice Kagan noted that HHS has the responsibility to protect the health and safety “of these incredibly vulnerable patient populations,” especially in the context of COVID-19: “by reference to the health and safety delegations, by reference even to the idea of administering efficiently programs like this, their principal job is to look after the health and safety of Medicare and Medicaid recipients.” She said that “every minute that these things are not in effect, thousands of more people are getting this disease.” Missouri Deputy Attorney General Jesus Osete conceded to Justice Breyer’s question of whether a hospital can say, “we don't want anybody with diphtheria walking into the hospital because everybody will get it.” Justice Breyer continued, “If they can say that, then why can't they say in the same breath, and, by the way, we don't want you walking in here in crowds that will spread COVID and this is how you stop it?”

Justice Sotomayor emphasized that this “is a spending clause case and not a general powers case,” which means “the government has more power to define where it wants to spend its money.” Chief Justice Roberts similarly asked the states whether HHS has broader authority because “it's in a spending clause provision? I mean, you signed the contract.”

Justice Alito questioned whether states had clear notice that by accepting Medicaid funds they would be subject to vaccination requirements for staff at their state-run facilities, what limits apply to the Secretary’s power to protect patients’ health and safety in facilities, and whether HHS consulted with the states before promulgating the regulations.

Justice Roberts noted that if any of three federal vaccine mandates—OHSA, CMS, and federal contractor—“present a close connection, it would surely be between a health threat like COVID-19 and the government's health care.”

Standing. Justice Thomas inquired whether the states had parens patriae standing (“I think that is going to be an important matter…”) and whether the mandate preempts state laws. Louisiana Solicitor General Elizabeth Murrill, participating remotely, argued that the states have parens patriae standing to protect the interests of their citizens and outlined additional bases for standing: (1) the states have to implement the rule; (2) the rule affects their provider networks; and (3) it directly affects Medicaid funding. Justice Kavanaugh called this “a very unusual situation” because “the people who are regulated are not here complaining about the regulation” and, in fact, “overwhelmingly appear to support” the rule.

Staffing shortages. The states argued that the mandate is likely to exacerbate pre-existing labor shortages in the health care industry, particularly in rural areas, which will cause people to lose access to medical care. Osete asserted, “Without the injunction, rural America will face an imminent crisis.” The government responded that the Secretary acknowledged and considered this issue in the final rule and explained that he was nonetheless adopting a vaccination requirement for several reasons. Justice Kagan questioned whether it’s appropriate for the Court to evaluate these potential disruptions and weigh them against the health benefits of the mandate. Osete said, however, that the rural providers did not have an opportunity to be heard.

Supervision or control. Justice Gorsuch asked why the regulation does not violate Soc. Sec. Act §1801 (42 U.S.C. §1395), which prohibits the government from exercising any “supervision or control” over the selection or tenure of health care workers. He questioned where the line is—could CMS also implement regulations about “exercise regimes, sleep habits, medicines and supplements that must be ingested by hospital employees in the name of health and safety, and would the government argue that does not control the tenure of those employees?” The government responded that setting standards for employees is not exercising control.