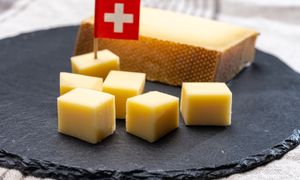 Because the term was no longer recognized by American consumers for cheese originating exclusively in France or Switzerland, the term had become generic.

The Trademark Trial and Appeal Board correctly found that the word GRUYERE was not entitled to geographical trademark protection, the federal court in Alexandria, Virginia, ha ...

Because the term was no longer recognized by American consumers for cheese originating exclusively in France or Switzerland, the term had become generic.

The Trademark Trial and Appeal Board correctly found that the word GRUYERE was not entitled to geographical trademark protection, the federal court in Alexandria, Virginia, has held. The court, ruling in favor of American cheesemakers against a consortium of European producers, found that the cheese was made in large volume in the United States and was no longer identified by consumers as exclusively from Switzerland and France, as the European cheesemakers had contended (Interprofession du Gruyere v. U.S. Dairy Export Council, December 15, 2021, Ellis, T.).

The case involves an application for a certification mark, which is defined under the Trademark Act as “any word, name, symbol, or device” used “to certify regional or other origin, material, mode of manufacture, quality, accuracy, or other characteristics” of goods. Geographic certification marks are used to certify that particular goods or services originate in a specific geographic region. For example, certification marks have been approved for the terms Roquefort and Cognac, both to denominate their French origins, and for the phrase Sunshine Tree—a denomination used for citrus fruits originating in Florida. (Perhaps more notably, the United States does not recognize the term “Champagne” as a mark exclusive to the Champagne region of France—a considerable sore point among the French makers of this particular sparkling wine).

The European cheesemakers then filed this civil action contesting the TTAB’s decision. The American cheesemakers sought summary judgment in their favor, leading to this opinion.

Certification. The court agreed with the TTAB and sided with the American cheesemakers, finding that although the term GRUYERE may once have been understood to indicate an area of cheese production, the term has now, over time, become generic to cheese purchasers in the United States. Under the Lanham Act, a term which was once non-generic and conveyed the quality or origins of food can become generic over time through a process called “genericide,” which occurs when a generic term ceases to identify in the public’s mind the particular source of a product or service but rather “identifies a class of product or service, regardless of source.” The test for genericness is the primary significance of the registered mark to the relevant public rather than purchaser motivation. Under this standard, the court found, the American cheesemakers had carried their burden of proving genericness.

The court found that four categories of evidence supported its ruling. First, the court noted, FDA regulations recognize that a cheese can be labeled GRUYERE regardless of where the cheese is produced. As the court explained, the FDA’s standards of identity are important to the FDA’s capacity to regulate those characteristics of a food label that would enable a food to be marketed as such, and thus “to ensure that certain foods accord with consumer expectations.” Here, the court noted, the FDA’s standard of identity for GRUYERE does not mention Switzerland, France, or any other regional restrictions on where GRUYERE cheese must be produced. Thus, cheese produced outside the Gruyere region of Switzerland and France may be labeled as GRUYERE and sold to United States consumers without contravening FDA regulations. Moreover, although the FDA issued this standard of identity in 1977, the European cheesemakers had never sought to challenge it.

Second, the court noted, a very large amount of cheese produced outside the Gruyere region of Switzerland and France is imported into the United States and sold here labeled as GRUYERE. Evidence of this nature is highly probative on the question of genericness because, as the court explained, it establishes that “when purchasers walk into retail stores and ask for a product, they regularly mean any brand of the product and not specifically one manufacturer’s products.” In this case, the fact that GRUYERE cheese produced outside the Gruyere region of Switzerland and France pervades the cheese market in the United States and is purchased in substantial quantities “directly demonstrates that when cheese consumers in the United States walk into a retail store and ask to purchase GRUYERE cheese, they do so without intending to limit their request only to Swiss or French-made cheese.”

Third, the court noted, the record also confirmed that a large amount of cheese produced in the United States is sold labeled as GRUYERE. Indeed, the record showed, millions of pounds of domestic-produced cheese are sold as GRUYERE—and furthermore, domestic GRUYERE cheese has been produced and sold in the United States for decades, dating back to the 1980s. The evidence that hundreds of thousands of pounds of non-Swiss, non-French cheese labeled as GRUYERE are purchased in the United States every year was, to the court, “convincing evidence that American cheese consumers understand the term GRUYERE to be generic rather than a term that indicates cheese from a limited geographic area.”

Finally, the court noted, evidence of common usage of the term Gruyere, including reference materials, media coverage, and industry practice, confirms that the term has become generic. Indeed, while some dictionaries define GRUYERE cheese as a cheese with Swiss origins, others merely describe it as, in the words of one entry, “a mild-flavored, nutty, yellow cheese made from cow’s milk” without mentioning any geographic restrictions. Viewed as a whole, the court noted, the dictionary evidence points to the conclusion that “the term GRUYERE is not restricted to cheese produced in the Gruyere region of Switzerland and France.” Similarly, the American cheesemakers identified a wide array of industry publications, trade materials, newspaper articles, and websites that used the term GRUYERE to refer to Wisconsin-produced cheese.